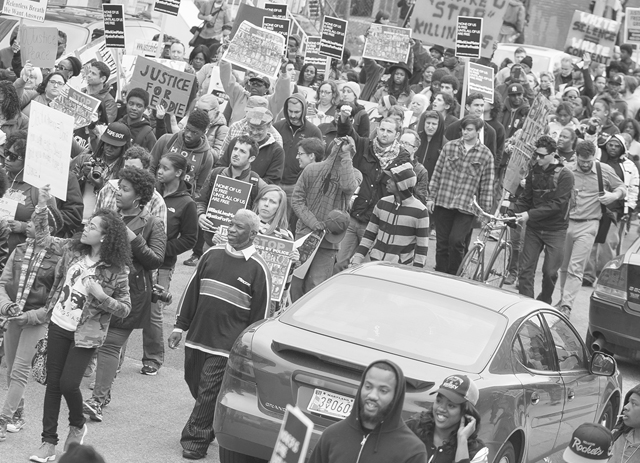 This project began in April 2015. Freddie Gray, a 25-year-old man from Baltimore, was arrested by Baltimore police on April 12, 2015. He had run after seeing the uniformed officers. Officers chased and apprehended him. Video shows Gray being dragged to a police vehicle. By all accounts, he was agitated during transport to a city jail. Officers used leg restraints to subdue him. While in custody, Gray displayed signs of serious injury, and he became unconscious. Police called for emergency medical assistance. Freddie Gray was transported to a hospital where he died on April 19, 2015, from a spinal injury.

Protests began outside the Western District police station on April 18 and continued after Gray’s death and funeral. Local and Federal authorities opened a series of formal investigations. Six Baltimore City police officers were charged variously with murder and other crimes.

In the meantime, protests continued. Police dressed in riot gear were joined by members of the National Guard. Some property was damaged or destroyed. Many organizations cancelled events. Businesses closed. The mayor enforced a curfew. Over one hundred citizens were arrested, held, and released without charges.

The response in Baltimore to the death of Freddie Gray is complex. On the one hand, it is part of a national trend. Across the country, frustration about police brutality toward African Americans has been growing. At the same time, the events in Baltimore are local and specific, shaped by a particular history of social and political life in our city.

In the aftermath of Freddie Gray’s death, our city has been the stage for additional protests against police brutality, vigilantism, racial injustice, and inequality. These events are tied together by common frustrations and by similar demands for meaningful action that can dismantle systemic racism. They are all part of the contemporary Civil Rights Movement. In recognition of this fact, we have expanded and renewed our call.

It is crucial to gather and preserve as many perspectives and experiences of protest and unrest as possible. Too often, history is shaped by official accounts. When the history of the Baltimore Uprising is written, we want to make sure it can include voices from the streets as well as voices from the halls of government.

Share your stories. Upload photographs. Show us what you've seen. Show us the sign you carried. Tell us what you witnessed. When were you there? Where did you stand?

Together, we will tell a more complete story. 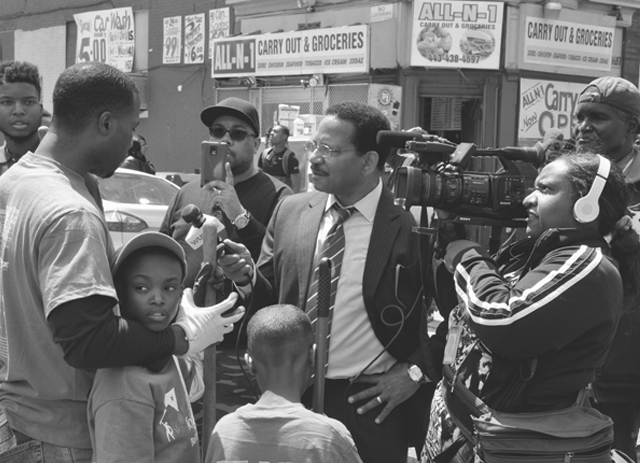 Preserve the Baltimore Uprising is a digital repository that seeks to preserve and make accessible original content that was captured and created by individual community members, grassroots organizations, and witnesses to protests against police brutality, vigilantism, and racial injustice and inequality. The project began after the death of Freddie Gray on April 19, 2015. Gray died from injuries sustained while in police custody in Baltimore, Maryland. It has expanded to include subsequent protests and calls for action in Baltimore against systemic racism.

A freely available resource for students, scholars, teachers, and the greater community, Preserve the Baltimore Uprising seeks to ensure that the historical record of these events will include diverse perspectives from people whose lives have been directly impacted by the complex events surrounding the conflicts in Baltimore.

People are invited to contribute original digital content, including photographs, video, audio, and stories related to memorials, community meetings, rallies, and protests occurring in Baltimore and the surrounding Baltimore County and City neighborhoods. Contributed content is publicly available and is subject to an evaluation process. Materials containing unrelated or offensive content will not be accepted. Some materials that are relevant to the collection may be marked as private and made available only to researchers, including materials containing content that could be incriminating.

Terms and conditions were updated in June 2020 for new materials contributed to this project. Materials dated June 2020 and beyond are contributed under a Creative Commons Attribution-NonCommercial-ShareAlike 4.0 International license (CC BY-NC-SA 4.0),and can be used, shared, and adapted under the following three terms:

1. Attribution — You must give appropriate credit, provide a link to the license, and indicate if changes were made. You may do so in any reasonable manner, but not in any way that suggests the licensor endorses you or your use.

2. NonCommercial — You may not use the material for commercial purposes.

3. ShareAlike — If you remix, transform, or build upon the material, you must distribute your contributions under the same license as the original.

For materials submitted prior to June 2020, previous terms and conditions apply. For any pre-June 2020 materials, contact the Imaging Services Department at the Maryland Center for History and Culture (imagingservices@marylandhistory.org) for referral to the original contributor regarding use of his or her content